Yesterday I was strolling on the "Garda Satwa" Instagram account and found a dog named Lilo who was very ill. He looks very weak and uncomfortable. He is a cute husky dog who was rejected by the owner two times. The first rejection is by real owner and the second by the adopter from the shelter. The Instagram account did not reveal why Lilo can be rejected two times, either because he is ill or because he is not behaving well? But the thing is, a dog also feels. He knows when he is loved or abandoned. Lilo feels very down because of the rejection and he does not want to eat. He rejects the food, he does not feel energised like the other dog, and he feels lonely. Afterwards, the Garda Satwa Team was brought by Lilo to the doctor and Lilo gets infused. He is so weak because his kidney is not functioning well plus he felt that he is not being loved in the world. In the one of the Instagram video that posted by the Garda Satwa, on of the guardians said "If Lilo recovered, there is a family ready to provide a home for Lilo, but... If Lilo feels weak and tired, Lilo can also decide to go..." 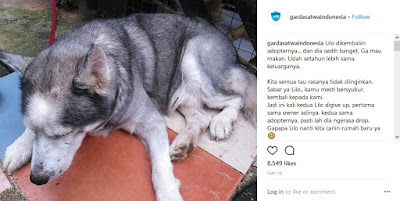 To the dog adopters and dog owners wherever you are, please see that your behaviour can impact to your dog significantly. If you think you do not have enough time to take care of your dogs or you do not feel like you can give your love to them, please do not keep them! You better told straight away that you cannot keep the dog before you adopt them if the real fact telling that so. In short, you need to give your commitment and love while you take care of a dog/ dogs because a dog has a feeling too like a human. Why can I say that? Because my dogs also feel. When he does something bad for example like destroying my sandals, he knows that he is wrong and he can feel bad and when he does something good and we treated him with a delicious cake or new bones he feels so happy and it looks fro his bright smile and face. Further, when I was travelling to Italy last March, in one of the central parks in Milan, there is a small incident of a homeless man and police. The homeless man was drunk and became such a troublemaker in the park and caught by the police. The homeless man was also having a dog with him and the dog is - you can guess - still loyal to the homeless man until the end. When the drunk man behaving really bad, the dog still beside him and barking just like telling him to stop and behave nice. And after that, the man was handcuffed and brought by the police car without the dog. And the dog is barking all the way and he was running to catch the police car just to be with his master. The moment it touched me and got me teary eyes. I was so sad for the dog. The was confused because his master is gone and he does not know what to do, who he will love and take care. Again, I am telling you that a dog also feels. So, we should think carefully if we want to adopt a dog because he/she is just like a human, need to be loved, taken care, and gave time commitment. We need to make sure that we can provide them with a proper home and foods and also attention for them. Let's keep this in our mind so the case like Lilo will never exist again!

Find me in Social Media